Now It's a Triple Dog Dare

Some would have given up hope by now. Bass players and their stupid union have way too much power. As if it wasn't enough for them to control all three branches of government and to get away with concealing hundreds of TOMMY's sexiness votes (yeah, pollhost called to report this suspicious activity), now they attempt to bully those of us playing in the higher frequencies. What has the world come to? The phone is ringing off the hook with people crying about how tonight they won't get to see the Jungle Party Love a Lot Care Bear AKA Guido Menudo, and how uncool the rest of us are for not being fully credentialled taco joke tellers. And now Sixteen Kendells, clearly an agent of the union, has taken to dropping little hints that he has somehow assisted New Wave Dave in asserting his superiority at Daddio's. Hey Kendells, I didn't get an MA in crypticology for nothing! But you don't have to worry, Joliet Jen and Dennis Myspace and Matt Myspace Plus Honeys, the non-bass playing segment of this band has plenty of ego strength, computer hacking skills, and sexy threads. We will not be intimidated tonight. We will kick to the gods of rock more gloriously than ever. And we will turn those bossy bass players all the way down in our monitors and do just fine without them!
Posted by The Devas at 6:47 PM 11 comments:

Okay, New Wave Dave, you've made your point. You can win the sexiness survey anytime you want, whether it's by commandeering a hundred computers, hacking pollhost.com, bribing the wireless gang down at Espresso to vote for you, or hoodwinking TOMMY TUBULAR devotees into using those funky paper ballots and then saying they don't count because you're scared of papercuts. Go ahead! Everyone knows that in a contest of who rocks hardest, even such very dirty tricks will not help you!
Posted by The Devas at 11:33 PM 8 comments:

Why Bass Players Need a Union

More secret spy photos from our Christmas party (these taken by the party crasher with her special third eye implant camera) show an early attempt to organize and the tragic results. I'm in the background doing my best to bust the nascent union, trying to confuse Menudo and New Wave with praise for their vocal performances. There's Larry laughing behind their backs, and since everyone knows that all sound engineers are bass players, I can only figure him for a potential scab. Later, Sixteen Kendells, who claims to know so much about bass players and their unique occupational hazards and fears of inadequacy, suggested Larry hit the road after he said something very rude about guitarists.
Posted by The Devas at 10:48 PM 13 comments: 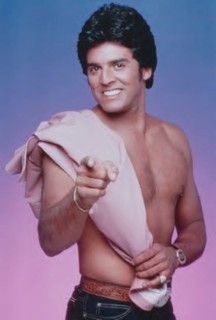 word has it that some sax-player-recruiting' no-good-keyboard-playin' robot requested homemade cheesecake last night. He is (as usual) too late, but...because he's so damn adorable, I thought I'd comply (so here's your picture JVH)...if Lynndi calls me, I'll give the recipe...
Posted by Smellen at 10:19 PM 1 comment: 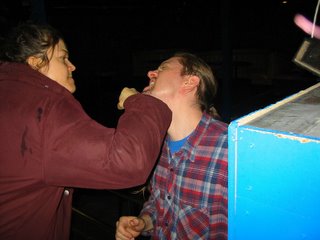 I know I probably shouldn't be publishing this photograph, but I thinks it's important that you - the Brat Pack fans, know the truth behind this band.

Lynndi Lauper rules with an iron fist. And she's not afraid to use it to keep everybody in line. Just look at poor Tommy Tubular - he talked about only giving 105% effort before the show at S2X instead of the Brat Pack's customary 110%.