Do We Not Bleed?

Apparently, Blogger decided the entire Brat Pack was a robot and locked us out of our account (now we're unlocked so the truth can be told.) This doesn't really seem fair, but I can see how it might have happened.

First we let the drummer hide out in his vast yet hidden underground laboratory for several months designing a reasonably humanoid droid who can make it to all of the gigs without the high degree of bitching you expect from a primate who plays keyboards. Then we boldly posted one or two pictures of it here and even gave it permission to comment. Before you know it, Blogger sniffed out the cyborg and concluded that we're all a bunch of circuit-boards and hinges and bionic limbs and toenail polish.

One bad apple might have spoiled the whole bunch girl for a week or so, but our clever consulting pediatrician was able to persuade the cuties at Blogger of our humanity with polaroids of the foot-sized bruise on my leg and x-rays of Guido's broken toe, both gig-related injuries, except for Guido's which was a recreational injury just before a gig.
Posted by Lynndi Lauper at 10:06 PM No comments:

Why Them and Not Me?

Some people might be wondering how, at a recent Downtown Champaign Streetfest, certain people were able to join us onstage with ease while others were hauled away by the brutish Mr. Kendells. 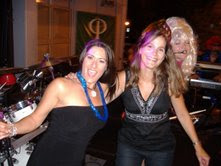 These hot chix actually ASKED first. How clever of them! One thing they had to offer that many others could not is that I know where to find them if they happen to steal a guitar on their way off the stage. 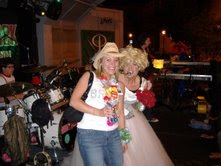 And then we asked this cutie to come up, probably because she appeared just when we needed a virgin.

I hope that helps to clear up any confusion! 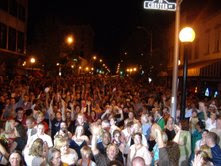 P.S. Thanks for joining us out in the streets. You rock.
Posted by The Devas at 3:21 PM No comments: