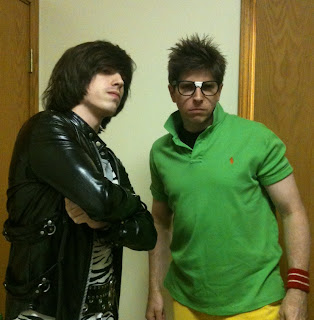 We caught up with Brendan Goes to Hollywood and Josh of Seagulls in some kind of utility closet where they were discussing particle physics. They looked exactly like this as we read off one contest entry after another:

Brucie, Blinded by the Light: "wrapped up like a douche" or "little hurly burly gave my anus curly whirly"
CCR, Bad Moon Rising: "bathroom on the right"
Natalie Cole, I Miss You Like Crazy: "I guess you like gravy"
Bon Jovi, Dead or Alive: "a stale horse I ride"
Men at Work: "Do you come from the land down under? Where women blow and then plunder?"
Madonna: "Some boys kiss me, some boys hug me, I think they're all gay."

We wondered if they were going to punch us in the eye so they could get back to theoretical cosmology, when suddenly we presented:

Bon Jovi, Living on a Prayer: "It doesn't make a difference if we're naked or not," to which O' Seagulls said, "That's how I've been singing it. That's not funny," to which Mr. To Hollywood said, "HA" which counts as a laugh, we think. 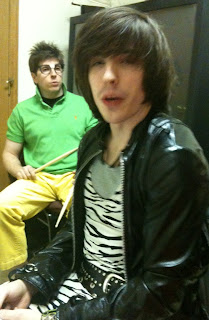 WE HAVE A WINNER!
Evan Garner, come on down!
Posted by The Devas at 10:58 AM No comments: