14 Terrifying Secrets about The Brat Pack. The Last One Will Give You Hives.

As if the buildup to Halloween weren't nightmarish enough, it appears that the Brat Pack has become hazardous to itself.

An anonymous source claims that the Brat Pack show is 38% more gruesome and 71% more life-threatening than ever. With reports of shark attacks, dancing zombie Michaels, undercooked bacon, MMA, chicken stabbings, banana peels, bass solos, oversleeping, Olympic lifting, amateur hair art, salsa, unwelcome hugs, chloroform, and even one incident where Brendan Goes to Hollywood turned the beat around while ruling the universe, what used to be a sweet 80s cover/party band sharing plastic beads and paper tiaras and experimenting with time travel has transformed itself into a Japanese reality television series. But what evil madman is to blame? 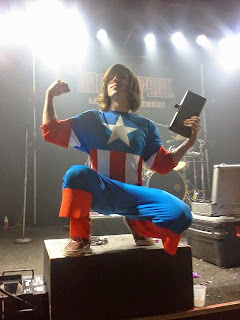