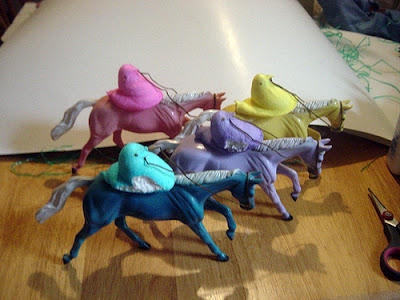 Doesn't the story of Christ's resurrection make every kid from 8 to 80 dream of pure sugar delights astride color-coordinated steeds? And now that you're in the mood for solemn religious occasions, here comes the Seventh Annual Brat Pack Easter Pageant Extravaganza!

Someone named "Katy M" was responsible for sending this to cuteoverload.com where they know what's good for you.
Posted by Lynndi Lauper at 9:52 AM 1 comment:

At the CUMusic Awards ceremony Thursday, April 5, the Third Most Evil Band will share a stage with that Jazz Combo with the Most Digestible Ingredients, bringing their bitter rivalry to a head. Ever since Tritone challenged Jazz Sandwich to try and play more notes, the training and scheming have divided a once peaceful community, sales of finger cots have skyrocketed, and everyone's turning to Tommy Tubular for advice. I just hope the showdown on Thursday evening settles this matter.

This is Tritone. They're so evil they can stand in snow for a long time without crying. Even when one of them is being mauled by a wolf.

This is Jazz Sandwich. Delicious if you can get your mouth around it.

This is CUMusic, ultimately responsible for the coming shitstorm.
Posted by Lynndi Lauper at 10:14 PM 4 comments: 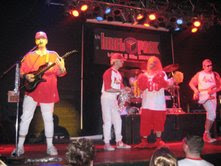 This guy's good under pressure.

At last weekend's gig (the fantabulous T-Street by the way!!!), I was prancing/standing around in a series of disconnected, slovenly, desperate costumes not particularly concerned with how anything I wore or did could be tied in with what everyone else was doing. Tommy and Guido actually looked like baseball players, and Josh did his classic Harry Caray stuff, and Jesse was born to be a blind umpire, but I figured "what the heck, they've got it covered, I can just kind of wander here and there stinkin up the place."

I was a black mouse convinced it was really a Cubbie mascot. I was a hot dog on sleeping pills, sticking my arms in and out of the armholes like that's what hot dogs do at a baseball game. I was Madonna in baseball lingerie that looks nothing like the League of Their Own uniforms (a 90s movie, in fact.) We're not going to talk about Michael Jackson Little League Coach anymore. Perhaps I crossed some line as a gigantic rabbit (The Astros, people!!!) eating the inflatable banana over and over again. Well, Tommy's no fool, and he understands the importance of a coherent story line, so he whipped up a really good one right when I was most orbital.