A Candidate of Our Own

Since we posted the blog about a couple of 80s luminaries running for president in 2008, we've been absolutely swamped with comments, emails, phone calls, drive-bys, and notes-tied-to-rocks from distressed readers who believe General Zod really has a good shot at beating that debonair tap-dancing freakazoid actor Christopher Walken!

Some of them are pretty sure this would lead to the end of the world as we know it. There might be something to their concerns, so we have come up with a solution we think will put everyone's minds at ease.


A candidate who can out-stare Walken and prevail in the Hollywood primary.

A candidate more conniving and fearsome than Zod.

A lifetime resident of Earth whose recent divorce has freed up a lot of time for cool stuff like being president.

A leader who would not shrink from calling on the spirit of Ronald Reagan if things ever got confusing.

A chick, in fact, more clever than Hil and more stylish than Condi. 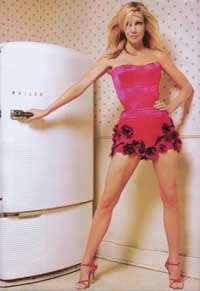