What does New Wave Dave do on his many nights off from the Brat Pack? I'm glad you asked! Here is a short list of his important duties as back up Brat Pack bass player:

Oh Why Did the Grammies Have to Suck So Bad?

Prince without a Revolution? Aerosmith with no Run DMC? Sting on his own, no Police protection? It's enough to make a man act like the Easter Bunny. As if this wasn't confusing enough, I didn't notice a single appearance by Flock of Seagulls, AC/DC, the GoGos, Bon Jovi, Blondie, or Devo. Were they backstage gagged and bound by all those bodybuilder divas? They didn't even have the ghost of Michael Jackson there to judge a moonwalk contest. On the upside, there was a pretty convincing Madonna impersonator, and some guys who looked a little like U2 won something or at least acted like they did.
Posted by The Devas at 1:32 AM 4 comments:

That's DJ Katy squashed somewhere among us at S2X in Cool City. She told us we'd do it, she told the audience we'd do it, so we altered the space/time continuum and set up at http://myspace.com/bratpack80. New Wave Dave was the mastermind, but he's not evil enough to poison the guys who already claimed "bratpack" and "thebratpack" over there. Don't worry - there's time, and I'm on the case. We already have friends and fair-weather friends and friends of friends and friends who act like they don't recognize us when they see us in public and friends who make us not need enemies. But we couldn't let the world's hottest DJ down, right?
Posted by The Devas at 1:03 AM 6 comments:

I Told You GI Joe Was Trouble

Didn't I warn you that GI Joe is always ready to drop trou? Even after Sixteen Kendells hauled him off the Tommy G's stage this weekend, he snuck right back on just in time to slip out of the shiny silver Brat Pack Dancer pants and show off his stylin' briefs. He wasn't even drunk or anything!

Here's more proof of his bad influence. With the tiny spy camera hidden in my corsage at our Christmas Party, I snapped these photos of Joe telling TOMMY how funny it would be to smash a beer bottle over the mouse's head once they lured it in with promises of rock stardom and cheese. Poor TOMMY - everyone's trying to spoil his image. I wouldn't be surprised to learn it was Joe who slipped me the mickey (careful, that's a pun) that made me think TOM was a Willy Wonka toy.
Posted by The Devas at 11:31 PM 4 comments:

What the Sharp Dressed Man is Wearing Down Under 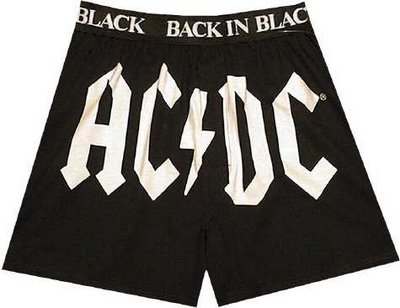 I really was the real Madonna all along!
Posted by The Devas at 5:39 PM 4 comments:

Sometimes when we're playing, I look over at TOMMY and think he's really a Willy Wonka Action Figurine. Who could blame me?
Posted by The Devas at 4:49 PM 8 comments:

Okay, who would you trust with your most fragile calculations - Josh or Al?
Posted by The Devas at 4:47 PM 4 comments:

One of these pictures is Guido at an ISU gig, and the other is the Jungle Party Love-A-Lot Care Bear. Even in person it's hard to tell the difference, since when you rub their tummies, they both squeek, "I love you! How about a hug?"
Posted by The Devas at 4:25 PM 5 comments:

I give up. You tell me which one is the Jessbot 3000 and which is Lieutenant Commander Data of the Starship Enterprise.
Posted by The Devas at 5:31 AM 5 comments:

Electric Larry and Something from Fraggle Rock. You have to look really carefully to see any difference. It's spooky.
Posted by The Devas at 4:39 AM 3 comments: