What I Did on My Summer Vacation 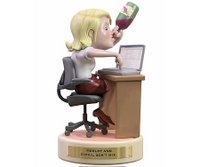 I know it wasn't actually summer yet when The Brat Pack took its annual week off. And I know that everyone knows I didn't really go on vacation at a beautiful remote beach on the gulf coast. I did learn some important stuff though, which I'm sure you'll find helpful.
Posted by The Devas at 3:10 PM 9 comments:

In MR. TUBULAR's perennially exciting and informative weekly missive to the masses, one finds only accuracy and integrity. If you will recall, his original message went out BEFORE the "big week off," at which time he believed himself and Guido Menudo to have been grounded. This was my own clever strategy.

Once Lynndi Lauper was safely en route to rehab (no, not a week on the beach - see how she lies,) I was able to reveal to the others the top secret plans I had made for each of them. Yes Guido and New Wave Dave travelled far to reverse climate change once and for all. Obviously, Electric Larry wowed all the other engineers with his newly mastered Brazilian Dance Party moves, and of course it is true that the Jessbot was due for "servicing." Josh of Seagulls' noggin was desperately needed in Hollywood, where he successfully theorized and postulated. I hope that you, our dear reader (literally), can appreciate the need for secrecy regarding TOMMY's mission to save the 80s. If MC Hammer had stayed the shy wallflower he was before TOMMY got there and set him free, where would the rest of us be now?
Posted by The Devas at 3:21 PM 10 comments:

In his weekly message to everyone on our email list, TOMMY told about our plans for this week:

"Brat Pack tip #86 - Vacation, all I ever wanted... The Brat Pack will be taking the week off to explore the farthest reaches of the continent. While Josh Of Seagulls is in L.A. doing session work, and attending a science fair, Jesse Van Halen and Lynn D. Lauper will be on the east coast dining on succulent shrimp, drinking umbrella drinks, and basking in the sun. Tommy and Guido have to stay home because their grounded for being naughty, but hope to get off early for good behavior and make it to the shows the following weekend..."

As it turns out, while Josh of Seagulls was filming a science video starring the guy who filmed a famous-star-in a-bikini video the week before, and while I was sipping iced tea in the south south south and Jesse VH was being recalibrated by a team of deep sea divers not far away, the rest of the band was HARDLY grounded.

Our Esteemed Bass Player Union (NW Dave and Guido Menudo) travelled to Antarctica with a bunch of dry ice to solve the whole climate change problem thing so that Baberaham Lincoln would be totally electable by 2008. Larry won the Sexy Dance Competition at a major international convention of super-cool sound guys. So what did that big liar TOMMY do with his time off?

On Sunday, he got himself back to 1984 and by Monday had upgraded the DeLorean this much, allowing him to spend the rest of the week in 1989 teaching MC Hammer how to party. 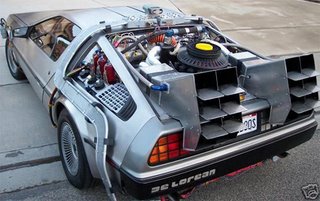