This year's Brat Pack Christmas Party was full of sacred ceremonies as we rang in the new. Alums Tommy Tubular, Guido Menudo, and New Wave Dave AKA Diamond Dave stopped by to assist with the transfer of superpowers to new Brats.

Here's Punky Drewster chillin with a fancy cigar prior to his "High Five Pre-Ordination" by the Holy Reverend Tubular. With the paperwork completed, Punky can officiate at weddings, funerals, fundraisers, and proms, and his wise words of wisdom will sparkle all across the land. Tip your bartenders, for sure. 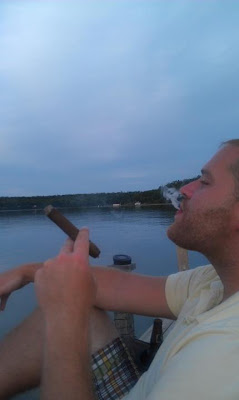 Then someone dragged out the dirty old Ibanez, symbolic of all much-loved and fondled guitars, and in an impressive triple-lick, our founding father empowered rock badasses 'Sam Kind of Wonderful' and 'Brendan Goes to Hollywood' with guitar infinity. They shredded til the break of dawn. 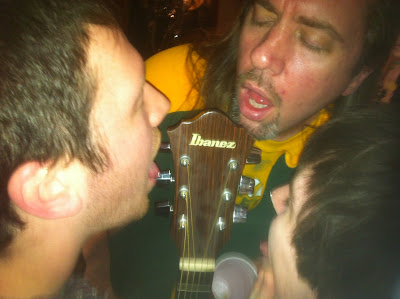 Meanwhile, in another room and perhaps another dimension, veterans Guido Menudo and New Wave Dave AKA Diamond Dave held a low end, four to five string summit with shooting star Alex in Chains. The powers of the bass are too cryptic and magical for witnesses to understand, but no sub woofers were harmed in Alex' initiation. This is what it probably looked like. 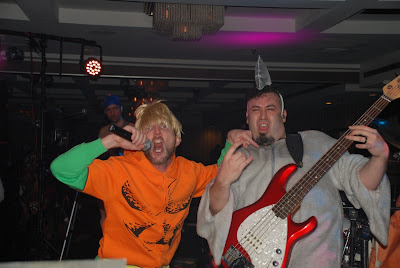 And this is probably what Alex is doing today. 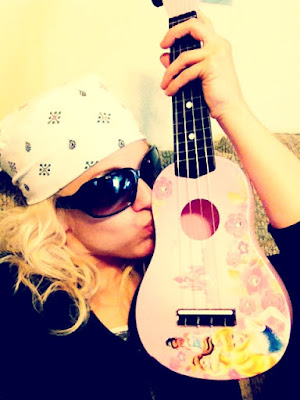 At the end of the party, Lynndi Lauper sealed the deal with our traditional 'every time we get together, someone gets hurt' move, this time thanks to excessive dancing. So now if you see her hobbling around on a cane and weeping, you'll know for sure that the Brat Pack's awesome superpowers have been conferred to the Next Generation, and the 80s will never ever ever have to end. Happy New Year to you too!
Posted by The Devas at 10:14 AM No comments:

Labels: anniversary, do some shots, holiness, sharks, things that are too big for the camera, transformation, we promise to keep the flame alive forevah and evah, world wide, wow
Newer Posts Older Posts Home
Subscribe to: Posts (Atom)